They say you can judge a lot of a man by the shoes that he wears. Women are said to use this assessment aggressively in the dating world. The types of shoes that we put on do tend to display a lot of our attitudes, fashion sense, and reflection of lifestyle. So what do men’s casual boots say to others?

Boots tend to show a stronger masculine side. Their associations are attached to the military, cowboys, bikers, construction workers, and outdoors men; to name a few. Boots allow for displaying strength within one’s personal style and function. Alpha male archetype rappers incorporate into rhyme their choice of this style of footwear by often mentioning ownership of a pair of Timberland; popular in street and hip-hop culture.

The essence portrayed by these tough characters is that of being rugged and rough. They allow their footwear to be an extension of this demeanor. Men’s casual boots have a lot more versatility than a braggart display of machismo, and shouldn’t be blanket coated in judgment to a man wearing a pair.

Boots can be a part of any man’s wardrobe; from a family man to a hipster artist. Having a pair of boots just becomes useful to have in our footwear arsenal. Whether casual, recreational, or a blend of both. Even though we may not need to own a pair that are career or job related, like a police officer or lumberjack, they at times will be a welcomed option and may be even a necessity.

We can discover men’s casual boots might be just what the doctor ordered!

From A Doctor To A Punk!

Dr. Martens boots have been around since the1940s, and are still a popular choice in footwear. They peaked with popularity in the 1990s in the punk rock and grunge era of fashion. The company still produces a well crafted, stylish and functional boot. They are easily noticed by their trademarked yellow stitching on the top out soles. The brand boasts an air-cushioned sole for comfort.

The English brand has made fashion waves for decades in the states and maintains an acceptable fashion statement from Punk Rockers and beyond. Though both are a popular and good choice, Timberland easily wins out in options of boot style and color. Also, Dr. Martens have a reputation for a longer break-in period and are reported to cause blisters.

Because of this, Dr. Martens may be recommended for exclusive casual wear and not to be used as a work boot.

But both Dr. Martens and Timberland boots have become a staple choice for men’s casual boot choices. Let’s review some key reasons why this style of footwear is popular with men.

Let’s face it. There are some places where we go that wearing a pair of sneakers or sandals isn’t accepted dress attire. Having a pair of nice casual boots can fill this requirement without having to be too fancy with traditional dress shoes. I’ve personally worn a pair of well-polished black boots with a button up and tie to weddings and other dress-up functions.

Boots look just as good in a celebration atmosphere as they do on a uniformed man. There’s a sense of authority to a man who wears a pair and also displays confidence. Dr. Martens and Timberland boots also go well with a pair of jeans to truly make them casual. And if by chance, a hiking expedition suddenly presents itself, you’ll be ready to go!

Solid, neutral and earthy colors such black, gray, brown, and beige are all available in a men’s casual boot. Whatever your sense of style, it can be supplemented with the right type of boot!

Having a pair of boots on foot gives better ankle support to help prevent sprains and breaks. In an outdoor terrain scenario with unpredictable trail conditions, boots over sneakers will win out every time. Many styles of casual boots are also waterproof or resistant.

Better traction should never be confused with being slip resistant. Unless the boots specifically tell you that they are slip resistant, you’ll have to be cautious with your stepping. Rugged soles work great in mud and dirt for added grip, but do not guarantee the same results on wet floors and ice.

But overall, you’re going to get added cushion, support, and added grip with a pair of boots! 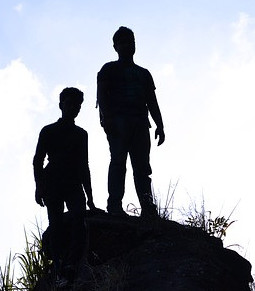 The simple truth, to many a man’s dismay, is that some guys are what is considered short. It’s an unfortunate truth that many women prefer tall guys. Some women won’t even give you a glance of a chance if you are under six feet tall. I personally am short (about 5’7″), and have dealt with this fact throughout my life.

I have grown comfortable in my own skin and body, and mostly don’t ever think of myself as being short… Until I’m in a sea of giant humans! (Once I worked a party that was literally a tall persons club. It made me feel good about my height!) I honestly would rather be on the shorter side than the overly tall.

Just by the natural design of a boot, having thicker soles, can give your stature an added inch or two. You can add inches to your height with a pair of boots, but tall people can never make themselves shorter! Sometimes an added boost in height can give a guy an added boost of confidence (if one is prone to be concerned with such issues).

Men’s casual boots have a functional and fashionable sense about them. Wearing a pair can convey a sense of strength, adaptability, and sense of adventure. And for shorter men, can give some added height when in the trenches of the capricious dating scene.

Dr. Marten, and especially Timberland, have many options to suit your taste of style in boots. But they of course, are not your only option.

These gray pair of Rockports, for example, are another casual option and are waterproof!

I’ve been into wearing boots since my early 20s, when I started riding street motorcycles. The casual and adaptive function just carried over with me into other areas of my life and style preferences.

I recommend owning pair of casual boots. They can take you from the coffee shop, to the wedding hall, to the mosh pit!

Thanks for reading. You can click the links here to check out other styles of casual boots or the links above for the boots illustrated. Check Out These Men’s Casual Boot Options!===>

*I have affiliate links included where I may make a small commission for a purchase. These products were not given to me and the links do not affect the price of the items in any way. Thanks again!

Don’t Be Cruel | Rock Out With These ELVIS GLASSES!

2 thoughts on “Men’s Casual Boots | Just What The Doctor Ordered!”

Welcome to Human FIgure Of Speech. My goal here is to have fun educating, entertaining, and contributing to the understanding of ourselves and one another. I hope you have fun reading my material and learning new things about human behavior and how to read people!